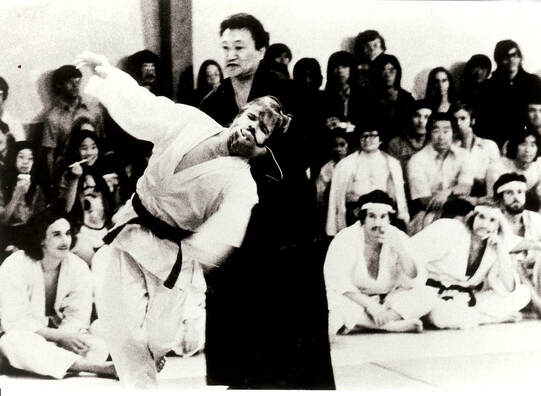 Mr. Mark Saito Senior deserves a full set of volumes just on him and his art alone.  He is the last living grand master of the Shorinjin Ryu Saito Ninjutsu.  I have dedicated a chapter to this art so I needn’t go on about it here.  Mr. Saito, himself, however, is quite a story.  He was born in Honolulu; his maternal grandfather, a grand master of the Saito art, had emigrated to the islands from Fukushima Japan circa 1903.  no one seems to know just why.

​What little he speaks of his past is underlined by a poverty-ridden existence in the shadow of the wealthy “haoles” who were streaming into Oahu by the thousands in the 1930’s and 40’s.  His was the world of turf wars.  The locals guarded their piece of the world, neighborhood by neighborhood, and the ethnic barriers accentuated the differences.  Martial arts schools and boxing clubs thrived for the sole purpose of toughening the fighting spirit and bonding the neighborhood gangs.  It was extraordinarily dangerous to stray beyond one’s own “borders”. There were the Filipino sectors, Japanese, Chinese, Portuguese, Haole, Samoan and of course those who considered themselves Hawaiian.
Saito grew up with a practical, if not proper education; he studied with “Willie” Chow, Henry Okazaki and some of the Kung Fu teachers in town, but he was secretly being taught the Saito family Ninjutsu art by his grandfather.  Grandpa’s orders were “no talk!”  Even his family was unaware with the exception of his own mother, who also knew the art and sometimes coached him after his moody and impatient grandfather would walk off if the boy didn’t catch on immediately.

Saito is a true enigma.  He has a piercing genius.  He is a mathematical whiz, he has been a general contractor, an architect, a real estate broker.  He designs racing engines for sports cars, he is an artist and a sculptor, yet his formal schooling is negligible.  He is a “Renaissance Man” in the spirit of the term.  He says he owes it all to Grandpa.  “This is the Ninjutsu Master – one who sees what to do, knows how to do it – then does it!”
He refused to catch the “Ninja wave” of the late seventies and eighties even though his family art is called “Ninjutsu.” “We are no Ninja,” he declared, “This is Saito Ninjutsu, revered for a thousand years in Japan.”
“I no brag,” he would often say to his inner students, calling on his pigeon English to emphasize his point.  “I no tell you I’m the best, but I tell you this (with a twinkle in his eyes), I’m hard to beat!”  Then he would laugh one of those wise all knowing laughs that only a great sage can muster.
Every one of us who has studied with Saito has our own favorite “Saito stories” …At 250 pounds, he could stand on a table – have everyone turn around – then jump down and no one could hear him touch down. “How do you do that?” we would ask.  “Think light!” was his simple reply – then that irrepressible laugh!
Saito spoke of “The Gifts.”  He was referring to very special attributes possessed by those rare individuals he called “Master.”  These could not be taught, learned, bought or sold, “the gifts” would come to those to whom they would come.  Mastery has to do with accepting the gifts, but also accepting the responsibility that comes with them.