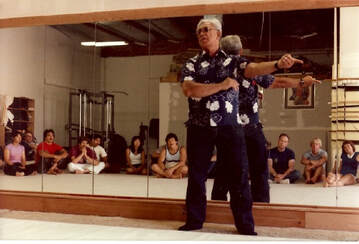 David Kawaikoolihili Nuuhiwa (Uncle David) was born in Kauai with a rich native Hawaiian legacy.  His Hawaiian name refers to the lacelike foam on a spilling wave.  He was born – literally – in the river a Hanalei, Kauai, and his life has always been connected with the water.  His son, David, Jr. is a worldwide surfing legend.  He is a generation older than Saito but the two have known each other for most of their lives. Uncle David had the same “classical” Hawaiian education with even more depth than Saito.  He was one of Professor Chow’ earliest students, under the fig tree, behind the tailor shop, and saw Chow’s most famous students come and go.  He was an early student of Henry Okazaki, and at age 17 received a scholarship to attend the Kodokan in Japan.  He practiced Aikido and Tai Ji Quan and is one of the few people qualified to teach the lightening fast art of Makaho (learned from a Chinese woman.)

One of 23 rowdy siblings, he was always the calm one, the wise one, everyone’s big brother, including Mark Saito’s.  David tells the stories that Saito was “a little hot headed” in his youth, rough and ready to fight at a whim.  David, who worked at the Waikiki theater in Honolulu, invited these young guys to come into the theater where they could watch the matinees, sleep as long as they wanted and keep out of trouble.  David was destined to be the guru, the spiritual conscience of the group of his generation, which included the likes of Saito, Sid Kuferaugh, Wally Jay, Joe and Sonny Emperado, and that upstart kid, Ed Parker.
Much of his spiritual conscience was quietly and prudently being instilled by his own grandfather who was passing on the Hawaiian Kahuna arts including the very rare art of Lua.  David received the honorary title of Dr. Kaito, “Bridging East and West,” because of his legendary worldwide tournament victories in the 40’s and 50’s.  Yet accolades of his youth mean little to him.  He once accepted the challenge of killing a bull in Portugal on national television with no rehearsal, but when pressed to talk of it, he mostly reminisces about how much his shoulder hurt afterwards.  “It was an old bull,” he recalls, “he had a hard head.”  The art of Lua, however, he speaks of with a humble reverence.

While still very young, David says his grandfather used to tell him that he would someday be “like a king” and a leader of his people.  He talked to him about “mana,” the power of God which is manifest in nature.  He was taught not only to respect nature but to talk to her, learn from her, and receive the power from the creatures of nature.  As his grandfather guided him, his teachers and classmates were birds and lizards and fish and the trees, and water and the wind.
Lua is not the warrior’s art, it is the priest’s art.  True Lua was not used by the young men to fight the island battles.  The ritual purging and “sealing” of the Spirit took place at a young age – it was for very, very few.  The Lua man was dedicated to serving and protecting the King.  If the king was approached by an antagonist, the Lua man would intercede.  He would approach the man or men with hands open.  “Lua man did not use fists, for fists were clenched in anger; his hands were always open in friendship.  The Lua man always spoke softly; never used kiai’s like the Kempo people.”  When mentioning this, David recalled an experience he had with Professor Chow.  Chow once shouted at a mocking bird in front of David.  David thought the bird flew off , but when he looked on the other side of the fence the bird had been sitting on, it lay there dead.
Whispering would draw the person in closer to hear.  It was a gesture of friendship, but if the issue escalated, the Lua man would be able to reach out, “place his hand on him and put him to sleep.”  The Lua man’s weapons were not spears, lances, forks or other obvious warrior tools, rather they were the same instruments used by the Kumahulas for dancing.  These were unobtrusive, readily available throughout the village, non-threatening and, of course, had other more appropriate practical usefulness in the village ceremonies.  Weapons were not used for striking but for harassing and pushing away.  The real weapons of Lua are the prayers.  If one is in good faith, his mana will issue forth.  His “touches” can cut off the blood circulation to the heart or brain.
David, true to his own spirit, will say nothing derogatory to those who have attempted to recreate Lua in the image of Kempo and Jujutsu;  on our long walks together he just patiently coaches me on how to listen to the wind, the water and to the birds.  “See the birds; see how they twinkle?  We twinkle like that…Practice in the water, learn to feel the currents.  The water is alive, it moves, and has changing rhythms – the water can teach you the real Lua.”

Forty years later in 1959, Grandpa’s prediction came true for David.  Hawaii became the 50th state that year and there was a great week-long celebration, the first of what has become known as “Aloha Week.”  It was a celebration of bridging the old ways with new directions.  Who better than Dr. Kaito to be such a bridge?  He was elected by the elders to be “King of Aloha.”  David presided over the festivities, wearing the robes of Kamehameha, King of the islands.  David has been recently recognized as “Ambassador of Hawaii.”  A proud all-knowing grandfather is certainly smiling on him from somewhere far above Haleakala.