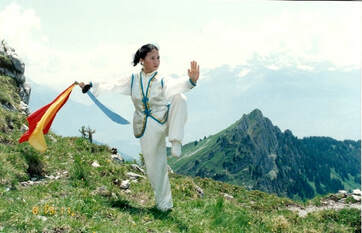 Despite all of these wonderful teachers I was destined to be lopsided had it not been for Mark, Bow Sim.  Mark is a Chinese woman, almost five feet two, with one of the most dynamic spirits I’ve known anywhere.  She had the power that I had always been missing, the power of Yin.  My whole life was the life of a young man growing into manhood with all the power of yang but weak in ways that only the power of Yin could allay.

Sifu Mark had always told me that my power was unique among her students, but then she would dump me to the ground and while I steadied myself she would muse, “You are big strong man, I am just little woman, how come you are on the ground?”  “You are strong but too hot, you must learn to cool your core.”  “save your money,” was one of her favorite comments.  By this she meant that men expend much too much of their essence (Jing need character) when doing martial arts.  The true art, she said was the conservation of energy, not the issuing of it.  She convinced me, over and over again with practical applications, but the results of Yin are more subtle, less spectacular than Yang and my male ego continues to require humbling reminders from the master of Yin – Mark Bow Sim.

In my book I preach that the true martial art is the art of learning to be beautiful.  Sifu Mark’s elegant grace, beauty and real internal power is the model I use to measure my own growth.  She has no openings, she is flawless, impeccable, she is beautiful, she is the grand diva of the martial arts world today.  Despite the articles written about her and the awards she has received, she still remains one of the most underrated grandmasters of our time.  It’s because, as I said, Yin is more subtle and less spectacular than Yang, which is as it should be, I guess…